On Friday 13th May, I gave a keynote paper at the international symposium ‘Aesthetics of Crisis: Ecology, Disaster, Representation‘ which was held at the University of Durham’s Institute of Advanced Study, and was generously funded by the Durham Institute of Hazard Risk and Resilience (https://www.dur.ac.uk/ihrr/).

The symposium was organised by Dr Kerstin Oloff (Hispanic Studies, Durham) and is part of a wider programme of activities. It followed the ‘Plotting the Crisis’ symposium held at the Durham IAS in 2013, and is part of the series of events run by the Ecology and the Arts Research group in the Modern School of Languages and Cultures at Durham (https://www.dur.ac.uk/mlac/research/groups/ecology/).

I spoke on my recent research, and my paper was called ‘Experiments in Ecocriticism in the French Caribbean’.

It was a chance to discuss the ideas I set out in an article which will be published any month now… In this article, I undertake a cultural and political examination of the Manifeste pour les ‘produits’ de haute nécessité, a manifesto co-authored by a collective of leading Martinican cultural figures, including Chamoiseau and Glissant, in response to the general strikes of 2009 in Guadeloupe, Martinique, French Guiana, and Réunion. These  strikes focused metropolitan attention on the high cost of living or ‘la vie chère’ in the overseas departments. I argue that authors are creating new forms of hybrid cultural creation which aim to transform human attitudes towards work and natural life, and to address the potential impending environmental catastrophe in the Caribbean, and beyond.

What is the link to Zobel, you may well ask…?  Well, as I’ve commented before on this blog, my current research is identifying a number of environmental themes in Zobel’s work (see previous posts on my public talk at the Toulouse La Novela festival, my work with Birmingham Institute for Forest Research, and my page on Ecocriticism).

The day had a fantastic line-up of papers which discussed the anthropocene, depictions of migration, and Cli-fi, the branch of Sci-fi that focuses on environmental themes.

It was a pleasure to meet so many colleagues working in related fields, and it provided a rare opportunity to mix in an interdisciplinary environment. The other keynote was provided by Dr Mark Anderson (University of Georgia) who gave a fascinating paper on  “Latin America in the Anthropocene: Crisis and Cultural Representation” and has a book out soon on that research project. I’ll be looking out for it…

I’ve just written an item for my University webpages giving an update on my activities, and here it is below, too:

On 25-26th April, Dr Louise Hardwick gave a guest seminar paper at Cardiff University on her current research into Joseph Zobel. The talk was part of a larger event which included a research paper on Mozambique, and a book launch for a cultural Foundation based in Angloa. Louise was invited by Dr Rhian Atkin, Lecturer in Portuguese, who organised the stimulating programme of activities! 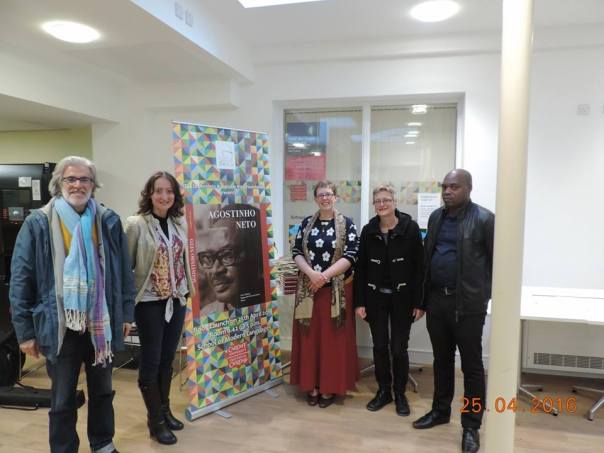 These activities were an invaluable opportunity to consider postcolonialism and the black consciousness movement of Negritude across Francophone and Lusophone contexts. Although the presentations spanned different languages and continents, the similarity of the themes discussed was striking.

After the papers, the book launch celebrated a generous donation of books about the life and works of the Angolan poet and politician Agostinho Neto. The donation was made by the Agostinho Neto Foundation, which is based in Angloa. For more about the foundation, see the @zobelproject twitter feed https://twitter.com/ZobelProject , and visit the foundation’s official website: www.faan.og.ao (in Portuguese) which currently features items on the events in Cardiff. The TV station Televisão Pública de Angola also ran stories on the launch.

The following day, to celebrate 26th April, which would have been Joseph Zobel’s 101st birthday, Louise led a workshop where she discussed her public engagment and Impact activities in Martinique, metropolitan France and the UK.